I love spring. I love the lighter mornings and evenings… the birds singing as they fly around building their nests… the feeling of hope in the air as plants and trees begin to wake from their winter’s sleep. And I especially love daffodils- seemingly growing up out of nowhere, even through the snow, they seem to sum up all that the coming season represents. 🙂

Daffodils, of course, are in the shops way too early for actual spring, and that’s one of the reasons I love them so much- though I do know this isn’t actually what nature intended, but is forced on them by greedy shop owners looking to cash in on as long a selling period for the bright yellow blooms as possible! But for me they serve a much needed purpose. Whilst lining the shop’s pockets from the second week of January may to some seem an unnecessary and maybe unethical (?) expense (though with a usual price tag of around a pound per bunch they can hardly be described as expensive!) they not only brighten the house during that dull period of time between Christmas and actual spring, but as a result can lift my mood.

Working from home- both as a housewife and mother, and now with my little business, means that the main view of the world I get is through the windows- and during January and February that can be a pretty depressing view. We may overlook the moors, and our garden is filled with trees and bushes, but when the weather is constantly grey even that view can begin to look a little lifeless. Still beautiful, but in contrast to the bright lights and colours and cosiness of Christmas it can, just for a few brief weeks seem completely dull- making it nearly impossible to be motivated into work of any kind… 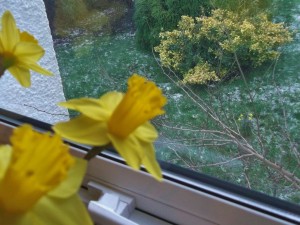 A simple bunch of daffodils on the windowsill can therefore make all the difference. While the ones left to grow wild are still tucked up safely beneath the earth, a patch of sunshine is blooming in my house and it makes me smile. On a dull miserable day it’s there as a constant reminder of what’s to come, and as the first stems start to emerge from the ground outside, and their buds begin to grow it’s as if that ray of sun is spreading from indoors to out… and shows that spring really is on its way.

So it’ll come as no surprise when I say that yesterday evening’s supermarket shop delivery contained some of my favourites. The shopping arrived just as I was dishing out dinner (bad timing, but it was the only time slot available when I ordered it!), and with the vases already full of the sad remains of last week’s bunches I didn’t actually end up sorting my lovely flowers out until everyone had left for school and work this morning.
And that’s when I realised that the daffodils stand for far more than just a bright spot on a dark winter’s day- they’re actually a really good analogy for family life! 😀

Daffodils are notoriously difficult to arrange neatly in a vase- for even though they have a single straight stem, they actually move about a great deal whilst taking in the water and opening their buds. They twist and turn and no matter how ‘soldier like’ you’ve positioned them; they’ll do their own thing! I was musing over this as I made a half-hearted attempt at arranging them in such a way before taking the vase through to the living room this morning- the reasoning behind my perseverance simply being to give them the best chance of not getting their flower heads caught in one another, whilst they are developing…

But as I attempted to separate the stems and tried to arrange them neatly around the edge of the vase, my attention was caught by what was happening inside the vase- to the stems beneath the water. No matter how carefully I tried to stand the individual flowers around the edges, the lower parts of the stems remained tangled together and criss-crossed over one another- one from this side leaning right across another, more upright flower on the opposite side… Another one- caught in the middle, was poking its way through to the front where its flower was blooming way ahead of the others… yet another, apparently smaller and weaker stem still in bud, stood proudly at the side slightly away from the rest, but still happily nestled within the bunch.
‘Oh well’ I thought to myself, ‘they’ll all still look beautiful together when the buds have opened out…’

And that’s when I realised it. That while to some life may indeed be like that famous ‘box of chocolates’, life is in fact far more like a bunch of daffodils. 🙂

Tangled and in a mess, struggling or confident, fighting for our place within the family… within our social circle… or in our workplace or just in society… or even quietly and happily working away in the background unseen- like the bulbs developing underground throughout the year- everyone is beautiful, and everyone has the ability to shine. And even more so when we have others to bloom and build our lives with. All of those tangled and complicated lives combine to make up our family and friendship groups, and are all the stronger for each individual’s input.

Of course there will always be some for whom the single life- free from ties of any sort is what works best, and we all have the ability to shine as individuals. But, for the rest of us- however close either physically or emotionally those others are to us, whether in the background or living with us, we still all thrive best with family or friends there to support us. 🙂
We need them within our lives… just like the daffodils need each other within the vase to look their most beautiful, and to spread that ray of sunshine into our homes. ❤